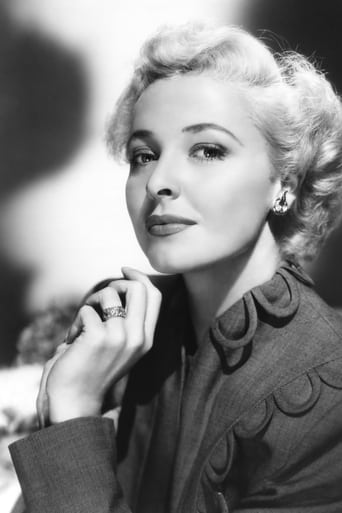 Laraine Day, born La Raine Johnson, was a major movie star of the 1940s and '50s. Raised in Utah as part of a prominent Mormon family, she came to Hollywood as a young woman, and made her film debut with an uncredited role in Stella Dallas. Before she was famous she also played the birth-mother of Tarzan and Jane's adopted son "Boy" in Tarzan Finds a Son. Her break came in 1939, with the wildly popular "Dr Kildare" sequels. Day played Kildare's nurse and love interest in the third through ninth Kildare movies, until her character married the doctor in Dr. Kildare's Wedding Day. As Mrs Kildare, she was written out of the next, and last, Kildare feature. In 1942, she starred with Ayres again in the underrated axe murder melodrama Fingers at the Window. Over subsequent decades, her memorable films included the flashback-within-flashback-within-flashback drama The Locket, the gangster comedy Mr Lucky, and the campy paranoia piece I Married A Communist. She was among the all-star passengers in the overwrought airliner-in-peril drama The High and the Mighty, and in Hitchcock's Foreign Correspondent it was Day who encouraged Joel McCrea to give his stirring report of the air raid at the film's climax Hitchcock's thinly-veiled plea for America to enter World War II. When television became a viable income source, Day found the small screen more inviting and less time-consuming than making movies, and she became primarily a TV actress. She had a 15-minute series of uplifting vignettes called Daydreaming with Laraine, and another 15-minute daily celebrity chat show called The Laraine Day Show. Married to New York Giants manager Leo Durocher, Day became one of TV's first female sports reporters when she hosted Day with the Giants, an early 1950s baseball talk show with Giants' players that aired on New York City's Channel 11. Her last film was a low-budget thriller, The Third Voice, in 1960, but she continued taking occasional guest roles on TV series Love Boat, Fantasy Island, Murder, She Wrote, etc. through the mid-1980s. Following her retierment she spent the remainder of her life active in the Mormon church, Republican politics, and various charity related work. Upon the death of her third husband Michael Grilikhes in March 2007 she moved back to her native Utah where she died that November at age 87. She is interred at Forest Lawn Memorial Park, Hollywood Hills, Los Angeles, CA.​